Connectivity between Iceland and Japan through new Pan-Arctic Fibre cable

Connectivity between Iceland and Japan through new Pan-Arctic Fibre cable

The FND fibre route will be the first Arctic route connecting Asia with Europe through the Northwest Passage. The route follows an approximately great circle marine route, greatly reducing the optical distance between Asia and Europe, thus minimizing latency.  The FND fibre is scheduled for completion and operation by the end of 2026.

The IRIS project has been in development since 2019 and the system is planned for service early 2023.  Farice chose the landing in Ireland due to its short distance to Iceland with Dublin as one of Europe’s key network hubs. Direct connectivity between IRIS and FND fibre at the landing site minimizes latency for traffic between Iceland and Japan.

“We are very excited about the development of the new Arctic fibre cable that will bring the continents of Asia, Northern America and Europe closer together.  The landing of the cable in Galway next to our IRIS cable will drive the development of a new submarine network exchange, connecting Iceland to Asia, North America and Northern Scandinavia”, says Thorvardur Sveinsson, CEO of Farice.

“Farice is a terrific partner, and Iceland has the renewable resources to make the Internet greener”, says Guy Houser, FND’s Chief Technical Officer.  “Our combined system offers faster and more secure connectivity for the world and the North.  It is critical infrastructure in the information age.”

Farice is the owner and operator of two submarine fibre systems connecting Iceland to Europe, FARICE-1 and DANICE. Farice provides international wholesale connectivity services to telecom operators in Iceland, Faroe Islands and Greenland, and data centre customers in Iceland. The company provides diversified services to its customers including high capacity DWDM wavelengths, IP transit and Ethernet services. The IRIS system will be Farice’ third submarine system between Iceland and Europe, providing further diversity and redundancy for international connections to Iceland

Farice is fully owned by the Icelandic Government and plays an important role in Iceland’s infrastructure for the greater public good and economic life in Iceland. Visit: www.farice.is 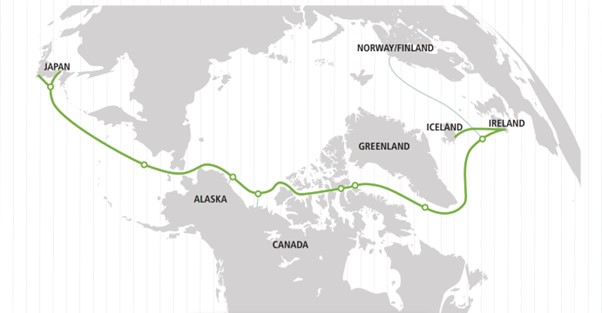