The company Farice hf was founded in September 2002 by several telecommunications companies in Iceland and Faroe Islands as well as the Icelandic State in order to build and operate the FARICE-1 submarine cable that was put into service in January 2004. The current form of the company, Farice ehf (Icelandic shareholders) was founded in December 2003. The second cable DANICE was put into service in September 2009. The company is now the main provider of wholesale capacity in and out of Iceland to Europe. Iceland was served by only one optical submarine cable Cantat-3 in the year 2002 when the company Farice was launched. Cantat-3 was put into operation in the year 1994 and was the last cross transatlantic electrically amplified SDH cable laid before the new generation of erbium doped amplifiers using DWDM started to appear by 1999 in submarine cables. The new generation of cables offered superior performance much needed for the fast Internet growth. The backup routes for Iceland until 2004 were via satellite and frequent outages in the Cantat-3 system caused some reliability and performance problems for International Internet and data services in Iceland. 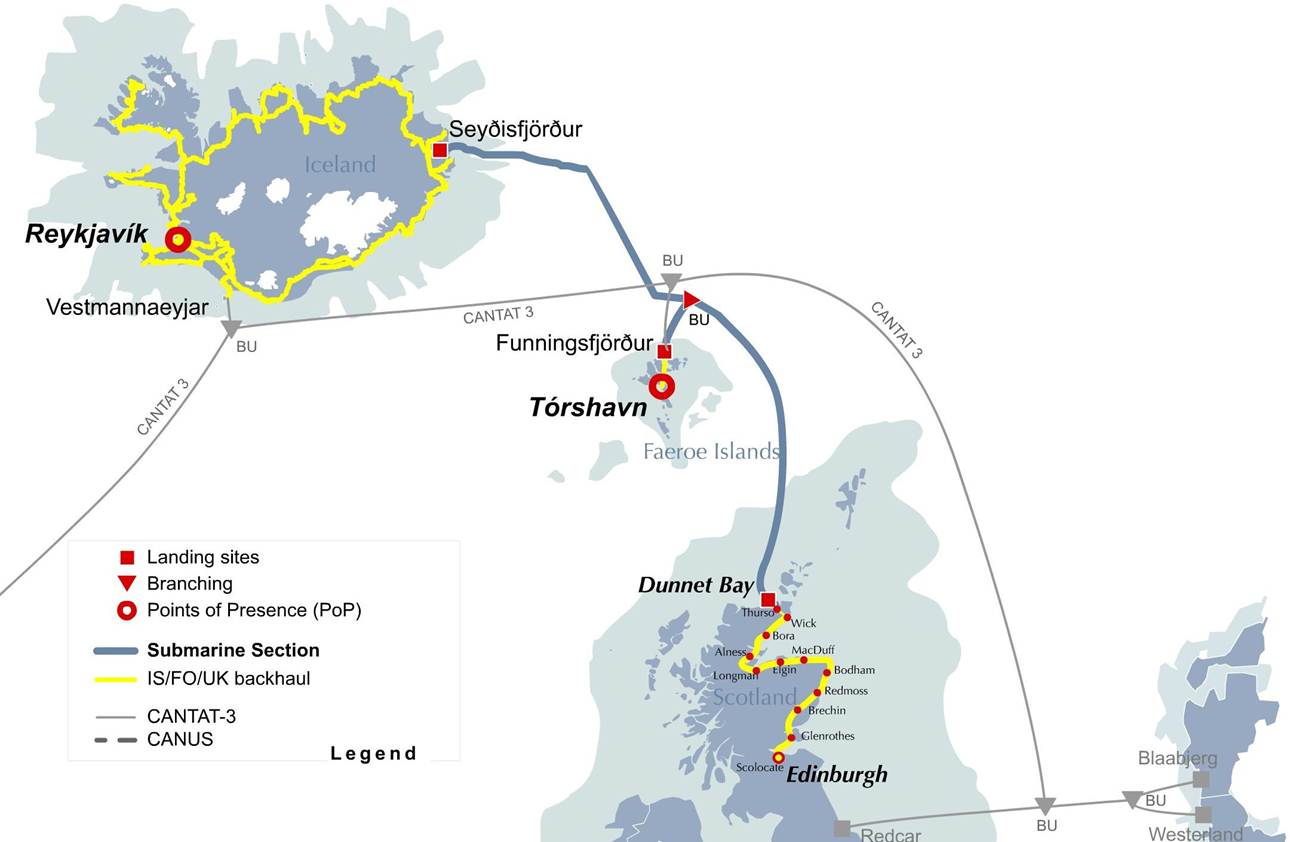 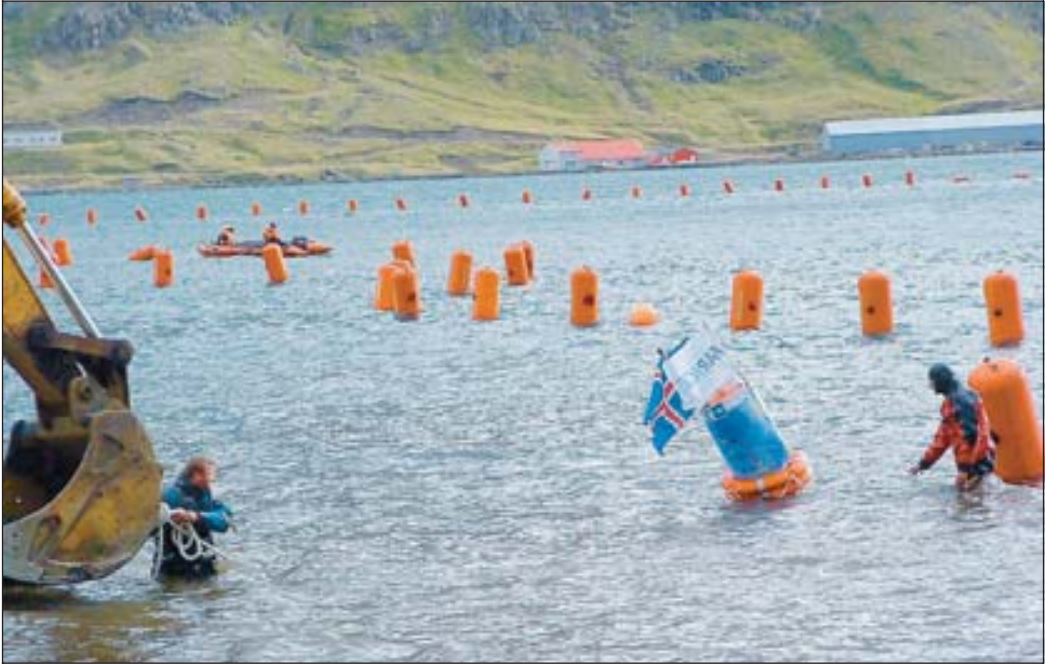 In the year 2000 the need for a second submarine cable was obvious and the incumbent Síminn started the preparation work for a new cable in the year 2000. In order to get more stakeholders on board the company PWC Consulting (PriceWaterHouseCoopers) took over the project management and introduced the general idea in a meeting in June 28th 2002. The (FARICE-1) cable was laid a year later between Seyðisfjörður Iceland to Dunnet Bay Scotland with a branch unit into Funningsfjörður in Faroe Islands. This was the first submarine cable wholly owned by local parties despite being the fourth generation of a cable to be laid between Iceland and neighbour countries since 1906. The FARICE-1 cable was put into commercial operation in January 2004 with a design capacity of 720 Gb/s and lit capacity of 20 Gb/s. The FARICE-1 cable was upgraded in August 2013 to a design capacity of 10.000 Gb/s and then a lit capacity of 200 Gb/s (now more then 1 Tb/s). Point to point services were offered between Reykjavík, Torshavn and Edinburgh. Later the service was extended into London with redundant routes in UK. The direct length of FARICE-1 in the wet section is 1205 km and the system supplier was Pirelli (now ASN) using TYCO (now SUBCOM) terminal equipment. In August 2013 the terminal equipment was replaced with CIENA DWDM system that offers much higher performance through the use of coherent optical technology and 100 Gb/s wavelengths. FARICE-1 has never had a cable-cut at the time of writing (2020).

Early in the year 2007 the preparation for the second privately owned cable to Iceland commenced. The project was initiated by the Icelandic state due to a need to secure enough capacity and reliability for Icelandic international electronic telecommunications. The operating life of Cantat-3 which provided 2×2,5 Gb/s into Iceland would eventually end and Cantat-3 would be too small by 2009 based on the yearly 40%-50% growth of the Internet traffic. The preparation project was later on taken over by the Icelandic ownership of Farice ehf. The design of the cable considered the needs of a large international data center industry which Iceland is well positioned to serve and the cable named DANICE has played an important role in the growth of that sector. A route bypassing UK was laid directly to mainland Europe through Denmark. DANICE was put into commercial operation in September 2009. The submarine cable length is 2304 Km and there are 4 fiber pairs with the original design capacity of 5120 Gb/s (5,1 Terabits/s) in total. The system was in January 2013 upgraded for a design capacity of at least 34 terabits/s and an initial lit capacity of 200 Gb/s (now more than 1 Tb/s) with coherent technology. The supplier was TYCO now SUBCOM. The DANICE cable is entering Iceland on the south side into to a purpose built landing station whereas FARICE-1 enters Iceland on the east coast. This leads to a highly distributed risk against natural hazards. DANICE has never had a cable-cut at the time of writing (2020). 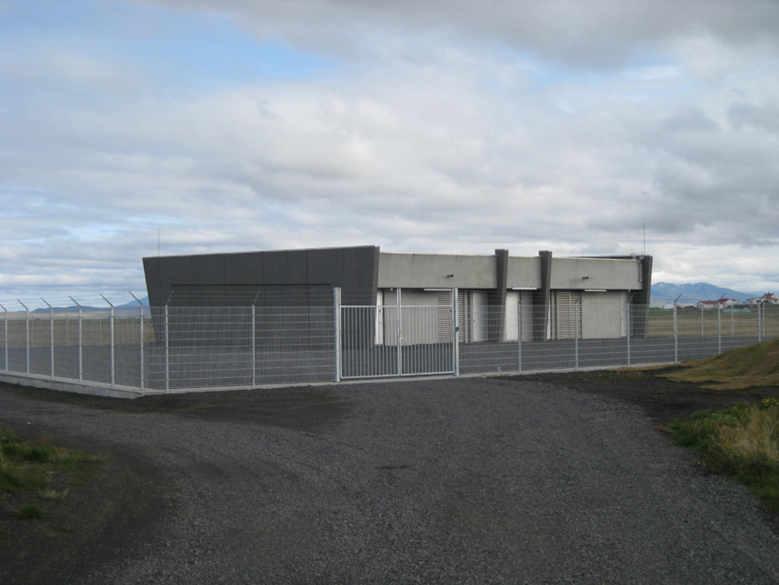 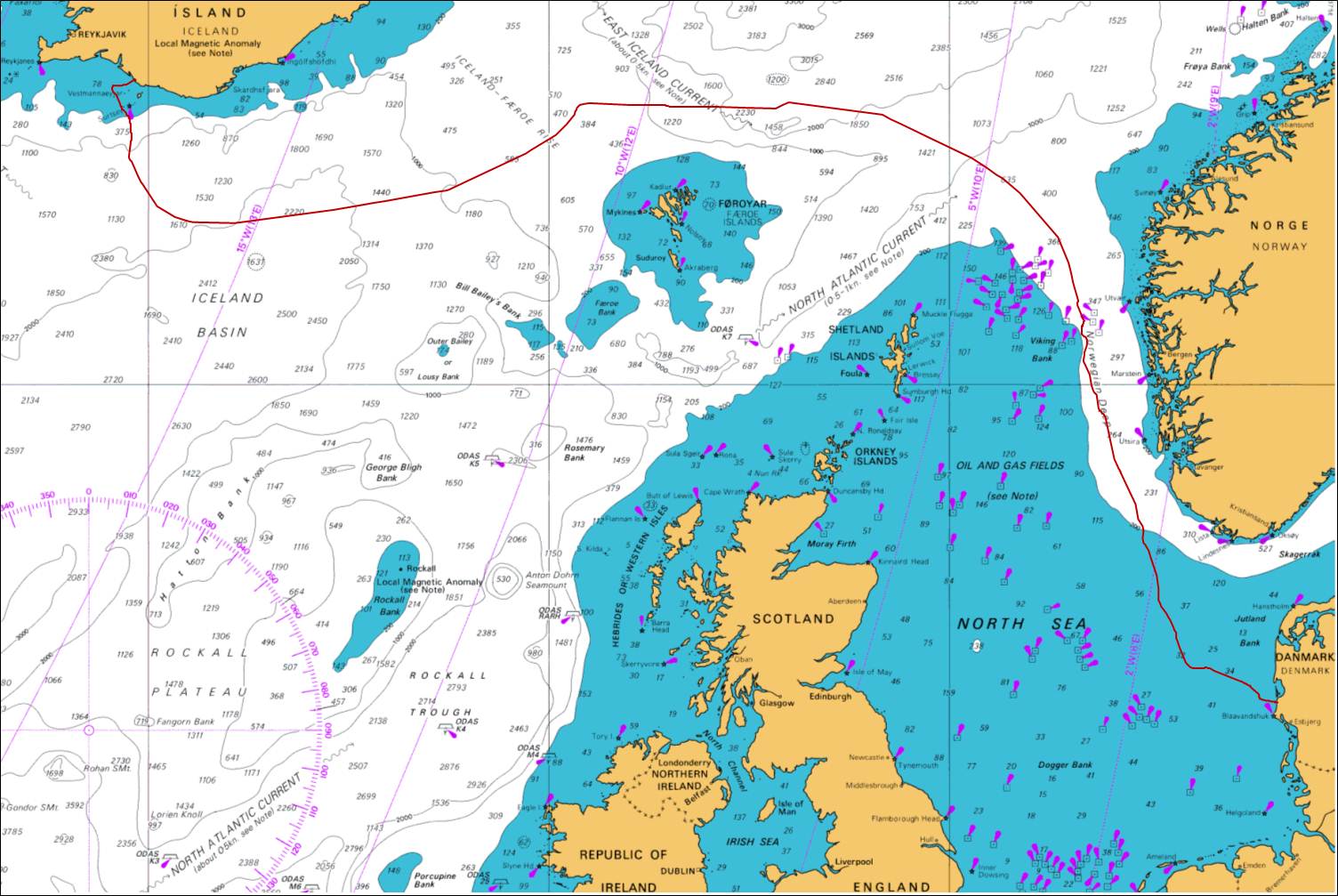 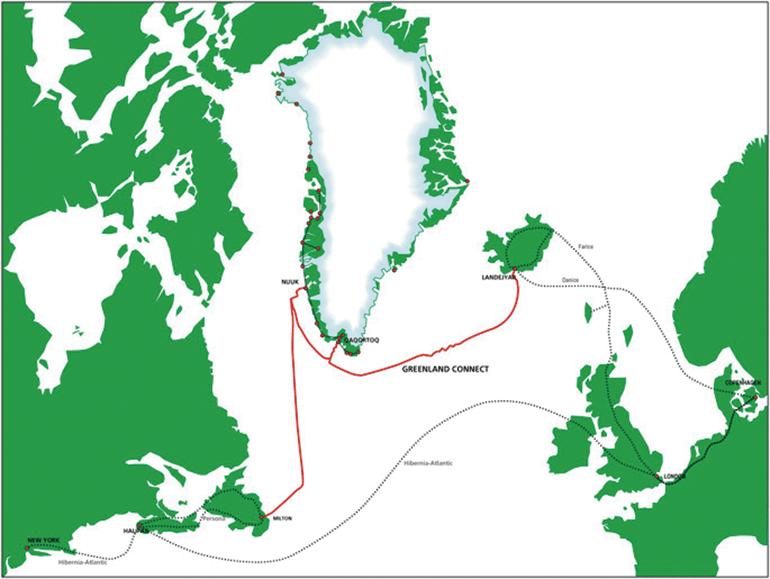 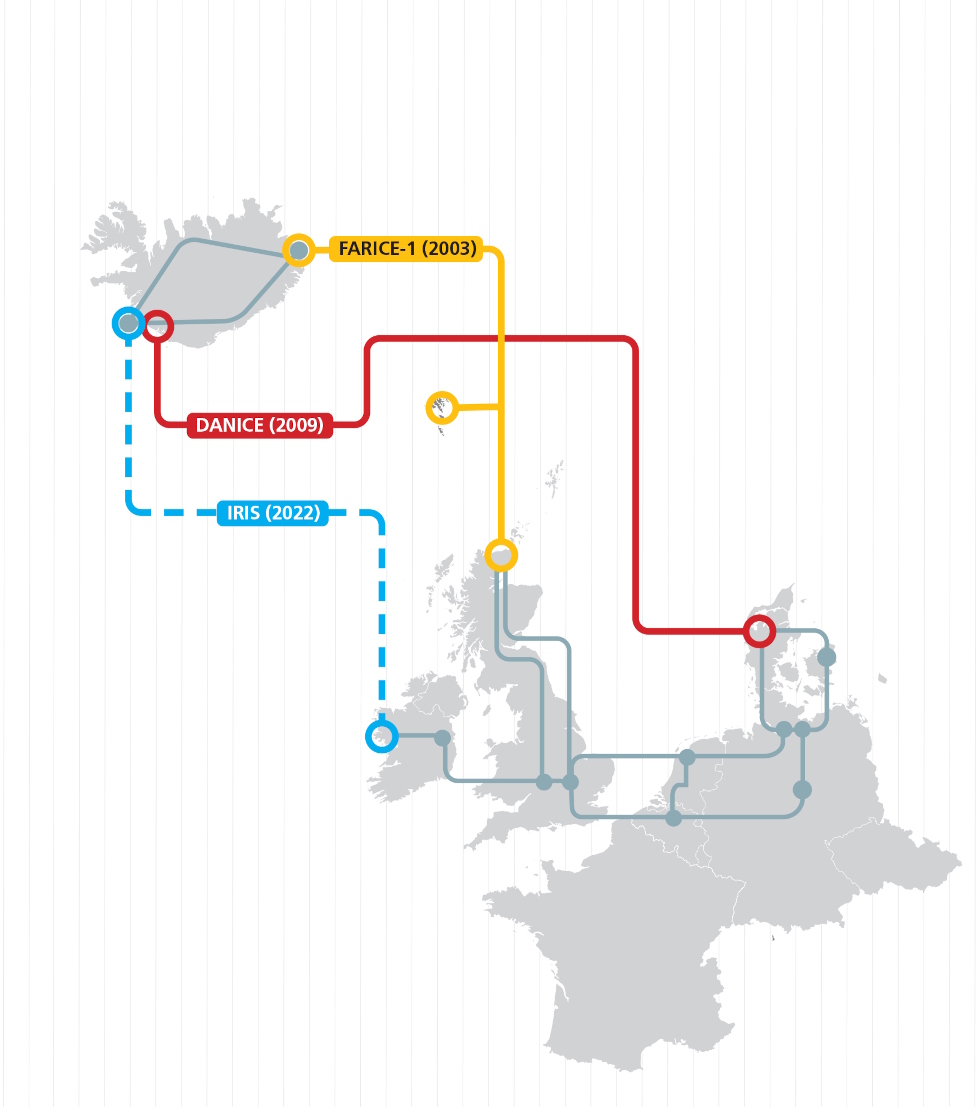 The third submarine cable owned and operated by the company Farice will be laid in 2022 from Reykjanes peninsula in Iceland to Galway in Ireland with service delivered from Dublin. The cable is designed for a total capacity of 108 Tb/s using 6 pairs. 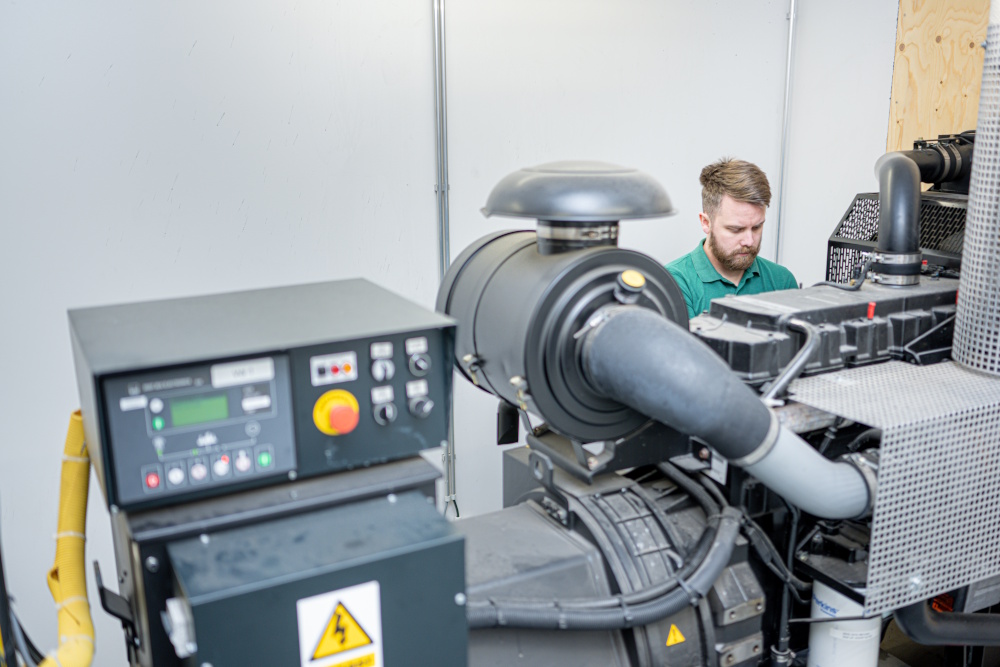 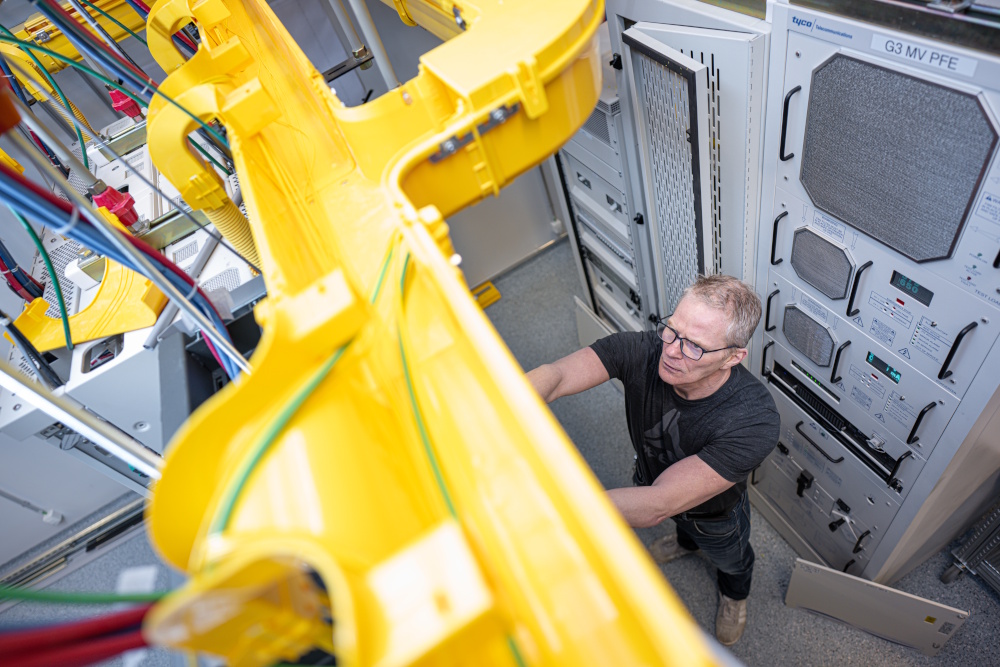 During the years the company has been extending the services with a wider footprint, more diversity and extended product portfolio. In the UK the reliability of the network has been much improved by having diverse routes from the CLS (Cable landing station) in Scotland down to London. There are in total four routes available in UK from CLS which combine into two routes in the northernmost part. This has led to a 100% uptime for terrestrially protected routes in UK. Farice does also offer diverse routes In Iceland and Denmark for those customers seeking the highest security level. Footprint of the network has been extended in Iceland with new service POPs at the Verne Data Center location near Keflavík International Airport in 2011 as well as a POP in the Equinix AM7 carrier hotel in Amsterdam Netherlands in 2012. This was an extension to the initial POPs in Reykjavík, Interxion, Ballerup Denmark, Telehouse, Docklands London and Torshavn Faroe Islands. In 2019 a new POP was introduced in Equinix LD6, Slough UK. Farice has traditionally been a wholesale carrier to the local service providers offering Layer 1 circuits in the form of STM-1 to STM-64 (10G) which have been replaced by 10G and 100G Ethernet DWDM type of services. To serve the needs of the various international data center customers and smaller service providers the company extended the service portfolio with an IP/MPLS network in the year 2012 and a Metro Ethernet network in 2020. Products such as Global Internet Transit and Carrier Ethernet (EPL as transparent circuits) are now offered.

During the years 2004-2020 the bandwidth delivered to customers has grown from 1 Gb/s to 1500 Gb/s or x1500. This is an annual average growth of 50% per cable (one cable in 2004). The domestic usage had an annual growth of around 50-60% in the 2004-2010 decade which has slowed down to 30-40% in the 2011-2020 decade. International data centers started to add traffic from 2010 and onwards and continue to grow faster then the domestic market annually on average and have overtaken the domestic market in bandwidth needs. 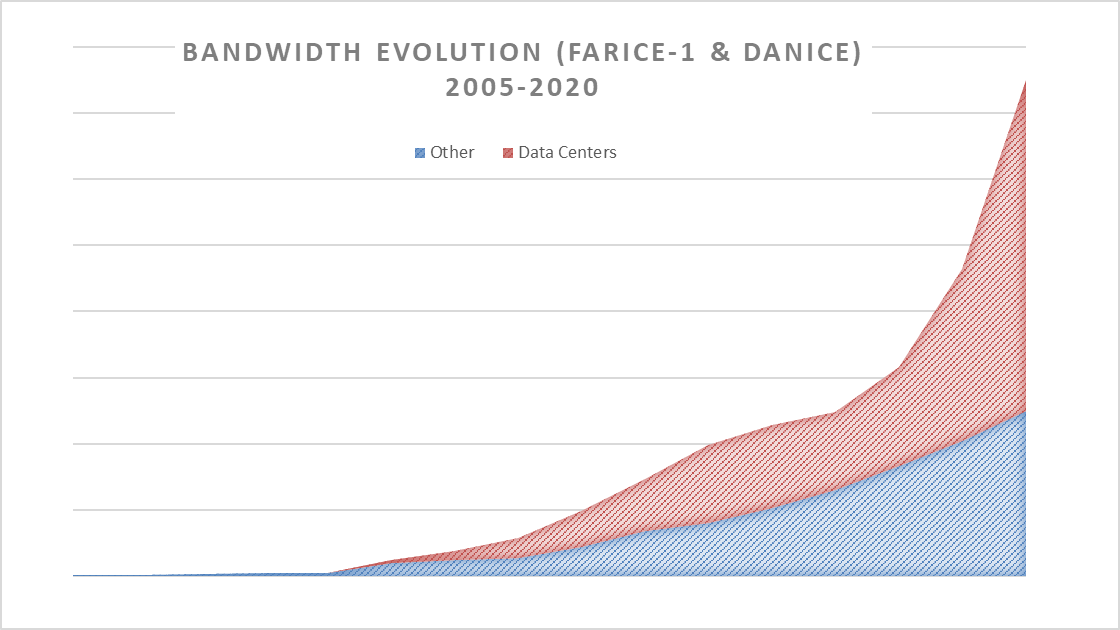 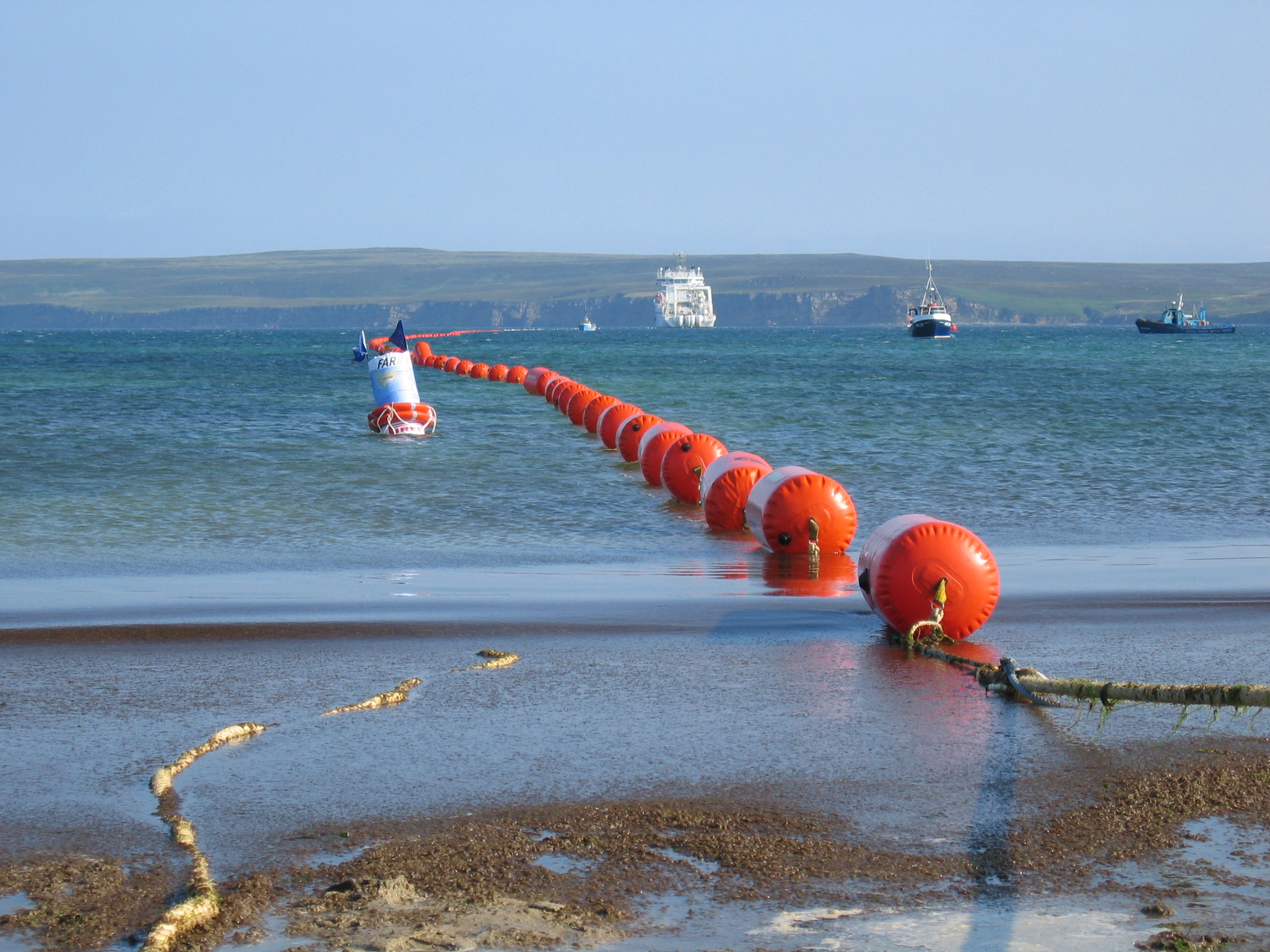 Prices keep dropping every year in the European wholesale capacity market and the prices for capacity in the Farice network reflect that. The domestic unit prices for an STM-1 (155 Mb/s) did drop by 96% from 2004 to 2012 or in other words the STM-1 unit prices were about 17 times higher in 2004 compared to 2012. This is equivalent to an average annual decrease in the STM-1 unit price of 30%. SDH services now belong to the past and Ethernet services are the norm. The annual price decrease for an 10 Gb/s service continues to drop and that is driven mainly by increased demand.

Higher reliability then ever

Prior to 2004 there was only one submarine cable (Cantat-3) connecting Iceland and Cantat-3 had a rather high relative failure rate. The restoration was only through expensive bandwidth limited and unreliable satellite services. After 2004 this changed to the better with FARICE-1 and satellite services ceased as a backup service. With DANICE in 2009 Iceland to a quantum leap forward with regard to reliability. During the lifespan of FARICE-1 and DANICE cables there has not been a single outage in the ocean (the wet section) in the form of fiber cut which is a huge improvement since the Cantat-3 days. For those seeking 99,999% or more theoretical uptime the third cable Greenland Connect offers services from Iceland to Halifax Canada. With the proposed IRIS cable in 2020 Iceland will be connected with four submarine cables of which Farice owns and operates three. The theoretical availability of the internation network to Iceland will be measured by 6 nines in the future compared to current 5 nines. The new IRIS cable will also connect Iceland straight to the important data center market in Ireland with a latency < 10 msec.