Formal handover of IRIS submarine cable by Subcom in a Galway event on Friday November 11th 2022.

Formal handover of IRIS submarine cable by Subcom in a Galway event on Friday November 11th 2022.

Galway to become a gateway to connectivity to Europe

Work completed on telecoms cable between Galway and Iceland

Farice, (a company fully owned by the Icelandic Government, currently owns, and operates two submarine cables linking Iceland to Northern Europe) announced this week that the IRIS Sub-Sea Telecoms Cable System connecting Galway to Iceland and onwards to Denmark and the Nordics, on existing Farice networks is now in its final phase of implementation.

In 2019 The West coast of Ireland and Galway was designated as a landing location for international telecommunications cables with Increased availability of terrestrial networks across the country enabling this. This modern high-capacity telecom cable will connect Galway to Iceland, the presence of the Farice system landing in Galway will provide direct high-capacity links to Iceland but also to Northern Europe via Denmark and will greatly increase capacity and connectivity in the Galway region.

Farice signed a contract with SubCom, LLC, a global undersea fiber optic cable system supply company, to install the IRIS Cable System and SubCom has now received provisional acceptance for the IRIS Cable System, the final phase before officially handing the system over to its owner, Farice.

Eamon Ryan, Minister for the Environment, Transport, Climate and Communications

‘The development of new digital infrastructure is essential for job creation and new business opportunities. Ireland is at the forefront of this digital development and is pursuing a strategy to be a gateway to Europe for all internet traffic. The IRIS subsea cable is a remarkable project which ensures we now have direct links from Ireland to Iceland and further diversifies the connectivity links across Ireland. This has extensive positive implications for Galway and the West, potentially opening up the entire region for new investment. And it highlights the West as a key destination for Europe’s internet connectivity infrastructure which is likely to attract future investments’

„IRIS, a new submarine cable connecting Iceland and Ireland, is a major milestone in strengthening and securing Iceland‘s electronic communications with Ireland and other countries. Together with Iceland‘s green and renewable energy sources this new submarine cable makes Iceland a highly competitive option for data centers, cloud service providers and high performance computing. Connecting Iceland and Ireland brings on new opportunities for both countries for co-operation in the highly connected digital world,“ said the minister in her message to Galway.

In his address, the Icelandic ambassador said that from the point of view of internet telecommunications, IRIS brings Iceland closer to Ireland. “We are two neighboring islands that share values and interests that are reflected in the history and culture of the nations. Recently, both countries have achieved very high levels of digitization and internet connectivity, including hosting data centers. IRIS shows that we can do things even faster and more efficiently and safely. The fourth industrial revolution has already begun, and the connectivity offered by IRIS improves our ability to embrace and leverage these fundamental changes even better.”

Minister of State Ossian Smyth remarked that “Today is a landmark in the history of Irish communications. Ireland has been an intercontinental communications hub since 1858 when the first transatlantic cable linking London and New York was routed through Ireland. Today is the first day that a subsea cable has connected to Ireland that is not linked to the UK or North America. This is the start of a strategic move by Ireland to connect directly to Northern and Southern Europe. Ireland is now open for business to further subsea cables. These new connections will increase resilience and reduce latency. They provide the infrastructure needed for the 100s of thousands of people employed in Ireland in the ICT and pharmaceutical sectors.”

“IRIS will enable us to accommodate the capacity needs of customers, and bring diversity and resilience to our existing network by providing an important additional route for traffic flowing between Iceland and Europe,” explained CEO of Farice Thorvardur Sveinsson.

“Our congratulations to Farice as they officially take the reins of the IRIS cable system,” said Debbie Brask, vice president of project management, SubCom. “IRIS presented SubCom with unique design, technology, and implementation challenges that were overcome in order to meet our customer’s needs. We worked closely with Farice to ensure that the system was manufactured and deployed according to its specifications. Reaching these final stages is a testament to the hard work, creativity, and resourcefulness shown by both the Farice and SubCom teams.”

Galway is identified as a landing site in Europe

Galway was identified as a landing site in Europe with suitable seabed approaches the location had the ability to land a cable in the heart of the city therefore greatly enhanced the attractiveness of Galway as a landing site and as a potential hub of global connectivity. Explaining why Galway, Thorvardur commented, “After careful consideration of many factors, Galway was selected by Farice as the European cable landing location. . The suitable seabed conditions and strong local infrastructure was a key decision factor for us when selectin Galway as the landing site of our IRIS system. This coupled with Galway’s reputation for business, education and hospitality will lead to a win win situation. The enhanced global activity provided by the system will be a catalyst for attracting high tech business to the city and the regions.” 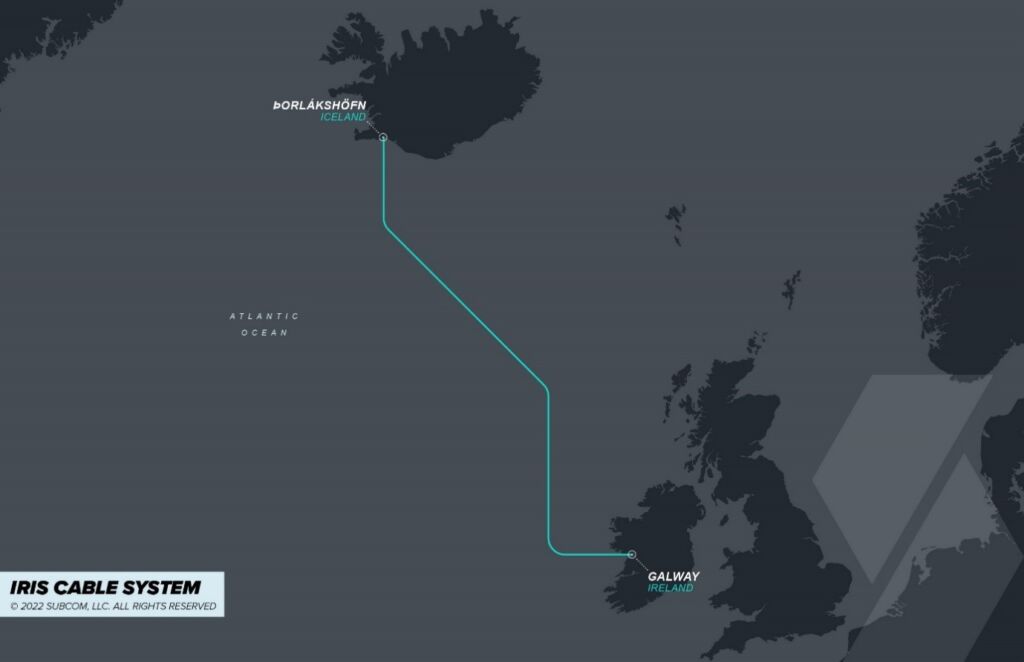 Farice is the owner and operator of two submarine fiber systems connecting Iceland to Europe, FARICE-1 and DANICE. Farice provides international wholesale connectivity services to telecom operators in Iceland, Faroe Islands and Greenland, and data centre customers in Iceland. The company provides diversified services to its customers including high capacity DWDM wavelengths, IP transit and Ethernet services. Farice is fully owned by the Icelandic Government and plays an important role in Iceland’s infrastructure for the greater public good and economic life in Iceland. Visit: www.farice.is